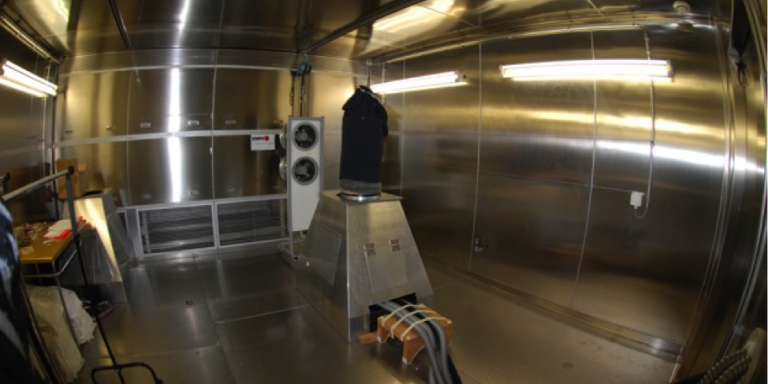 HYDRO_BOT is the first active moisture transporting membrane and textile laminate that transfer moisture and vapor (passive stage) from one side to another by means of on electroosmosis. It has been tested and developed in sophisticated laboratories (picture above) through collaboration with the Swiss Federal Laboratories for Material Science and Technology (EMPA) and other institutes.

The HYDRO_BOT fabric transports moisture electronically when/if needed independent of any external factors such as temperature and humidity gradients, with direct electronic control of direction and magnitude of transport.

The membrane has a high density of micro pores with charged walls, resulting in a charged layer of liquid with thickness several nanometers. A small applied voltage (ca 1 V) induces the membrane pores to actively pump sweat or condensate from the inside microclimate to the outside. See the demo here.

The HYDRO_BOT membrane has two main advantages compared to conventional ones:

The vapor vs liquid transport « paradigm »

While electroosmosis can be used both for direct liquid and vapor transport, Osmotex developed first commercial products for the former. Whenever there is a condensation problem in textiles, condensation happen. And even a small amount of liquid will result in high air humidity for long times. Therefore, by far the most efficient way of reducing air humidity in most textile and garment systems, is to remove the water first – something standard passive membranes are not capable of.

The figure under show the dehumidification of a microclimate using HYDRO_BOT – the orange graph with HYDRO_BOT turned off, and the blue with power on. Starting from a soaking wet membrane, one can see that the air dehumidification time is reduced from about 4 hours to 30 minutes by actively removing the water. In comparison, commercial passive membranes needed 5.5 hours in same test. 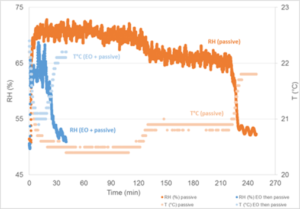 The principles of Electroosmotic flow was first discovered in 1809 in the Imperial Naturalists of Moscow. It is the motion of liquid through a porous material induced by electronic signals.  HYDRO_BOT is a results of more than 10 years dedicated research on how to best apply the principles of electroosmotic flow with the right membrane and electronic control system, so that moisture can be effectively transported through microscopic sized pores in the membrane. Osmotex is still doing cutting edge research together with academic and industrial partners.